Classes are offered Monday-Saturday in the afternoon and evening and are comprised of children and adults. The program is a part of the Monticello Academy and works to create a bridge between academia and martial arts. Though the classes are offered through Monticello Academy to current students and alumni, students from the community may also join with special permission from the instructor and the school. In addition to regular classes, students may also participate as members of the sparring and poomsae competition team who work hard to represent their school at tournaments and events.

The program’s curriculum is divided into five core branches.  Each branch is a key component in the development of the martial artist and through training, can aid students in self-discovery and growth.

The 5 branches of the Taekwondo program: 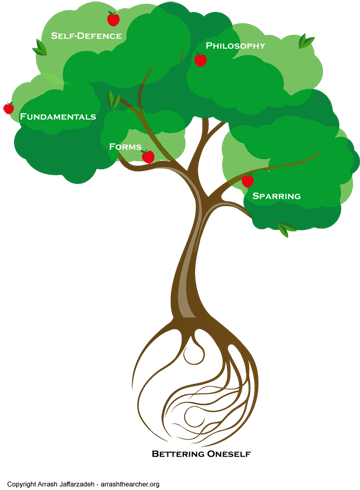 The fundamentals portion of the curriculum includes stances, strikes, blocks, and kicks as well as the development of balance, coordination, strength training, and flexibility. Board breaking and acrobatics also fall under this category.

Forms (poomsae) are a pattern of movement which includes a series of blocks and strikes combined with stances. Generally, each poomsae has symbolism or represents a concept or philosophy. As the students progress through their rank, they learn more poomsae to aid them in their training. Poomsae is a competition event where student perform their poomsae and are judged based on their technical skills and presentation.

Sparring (kyorugi) is an Olympic Sport which involves to athletes combating each other using protective gear by delivering a series of attacks and counter attacks with the goal of gaining as many points as possible within a given amount of time. As an sport in the Olympics, sparring is also a competition event in which student participate in throughout the year.

Self defense (hoshinsul) is also an important part of the taekwondo curriculum. The goal in self defense is to keep one safe by learning how to assess and determine the correct course of action. Self defense includes learning falling safely, joint locks, escapes, and much more.

Philosophy helps the student learn about the meaning behind the martial arts as a whole as well as the history of taekwondo. 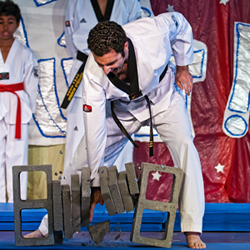 These five branches as a whole are interconnected and aid students reaching the goal of the program as a whole to create better citizens. Taekwondo students are on a quest to better themselves and in turn, contribute to their community.